The enduring song lyrics that go 'New Kids On The Block had a bunch of hits…', ring true — massive hit songs that were an essential part of mixtapes that 90s kids endlessly played on repeat. Now that it's 2022, it's time to press rewind to those NKOTB mixtapes that have gone up to the next level — the live concert stage! The boys, er, men of NKTOB dropped the tour news on Instagram saying, "Getting that confetti ready because we're coming to a stage near you in 2022!! We're bringin' our friends @Saltnpepaofficial (Salt N Pepa), @officialrickastley (Rick Astley), and @envoguemusic (En Vogue) along for the ride! The 2022 MixTape tour is happening at the Toyota Center on Thursday 19th May 2022. But before you press play, hit that 'Get Tickets' link on this site, to book your tickets and have a ball on MixTape tour 2022! 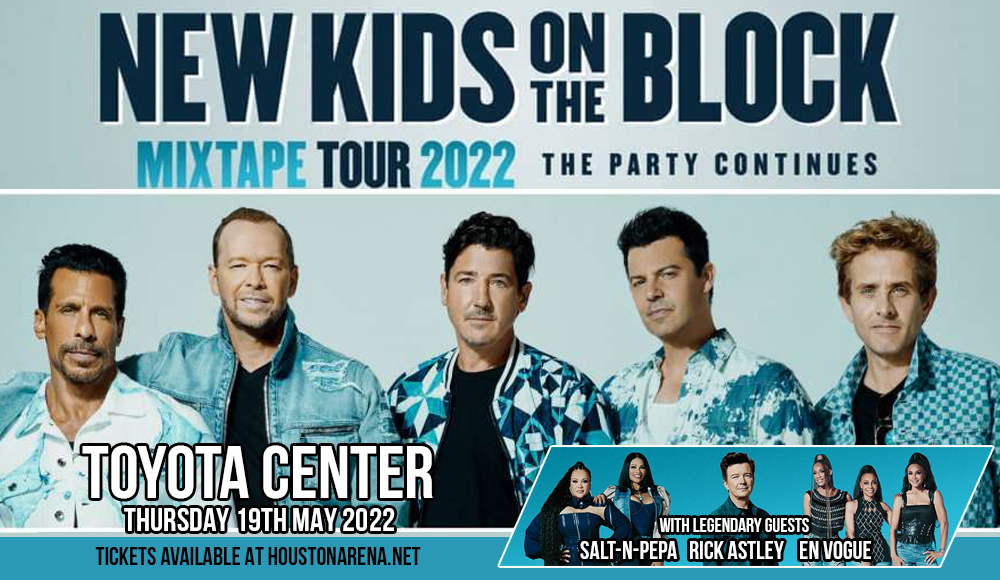 Imagine your 90s mixtape coming to life — seeing, hearing, singing along, dancing, and screaming your heart out as New Kids On The Block, Salt N Pepa, Rick Astley & En Vogue doin' the right stuff up on stage. Well, dreams do come true and will happen only at the MixTape tour 2022!

“We had a blast out on the first MixTape Tour in 2019, and can’t wait to take it to another level with our fans on the MixTape Tour 2022,” Wahlberg said in a press statement.“ Just like a mixtape, these shows are going to take audiences through all the emotions. To be able to have Salt-N-Pepa come back and now also have the iconic and legendary Rick Astley & En Vogue join the tour… we could not be more excited. Let’s GO!”

New Kids on the Block is at the helm of this exciting music extravaganza as fans of all ages can hardly wait to experience the dynamic and explosive showmanship of NKOTB as they dish out fan favorites such as “Hangin’ Tough,” “I’ll Be Loving You (Forever)”, "Step By Step", "Cover Girl", "Please Don't Go Girl", and many more. Having sold more than 70 million records worldwide, this multiplatinum artist also has two American Music Awards in 1990 for Favorite Pop/Rock Band, Duo, or Group and Favorite Pop/Rock Album, to their name. The group has been listed under Rolling Stone's Top 25 Teen Idol Breakout Moments, and also received a star on the Hollywood Walk of Fame on October 9, 2014.

This MixTape loop has an all-killer, no-filler lineup as it includes the current YouTube, Instagram Reel, and TikTok sensation Rick Astley, who has captured the attention of current generations, will perform hits such as “Never Gonna Give You Up” and “Together Forever.” Then girl power will give this show an extra kick as En Vogue and Salt-N-Pepa will surely unleash their powerhouse tracks like "Whatta Man", "My Lovin' (You're Never Gonna Get It)", "Free Your Mind", "Push It", "Twist and Shout", and many more.

Lock it in! This MixTape Tour 2022 is a can't miss night-out. Book your tickets now!